An official, commercial port of the first-person shooter game Doom made for use with WebTV hardware was in the works since at least 1998, with plans to target WebTV Plus and the EchoStar Dishplayer being known to the general public. This page will refer to this port as Doom for WebTV.

This port of Doom only got a proper release for EchoStar Dishplayer units by 1999. A version of the game for the original WebTV Plus, however, was already built and made available by late 1998, but as discovered by the original WebTV hacking scene, was only available for download by connecting to the "TestDrive" WebTV service, which was a section of the WebTV service intended to test daily service revisions. The files for Doom for WebTV had not been immediately extracted and released outside the WebTV service from the time the game was available on there as a result of information on how WebTV Plus/DishPlayer HDDs worked not being available, the service apparently being able to command connected boxes to wipe the internal Plus version of the game from their hard drives [1], and possibly no one caring to look into it. These events resulted in the port being considered lost for a long while.

In 2014, the Dishplayer version of Doom for WebTV was preserved in a way by being included in a custom firmware image known as "HackTV", which was distributed by MattMan69, a known WebTV "hacker". By 2021, both MattMan69 and eMac discovered the files for the original WebTV Plus version of Doom from a CD-R backup Matt had in hand and salvaged the files from that. This preservation effort however was also exclusive to downloading a custom image MattMan made for WebTV Plus, or by having access to a private "full WebTV server" he operates at the time of writing. The original Plus version being offered right now also replaces the splash screens to carry MattMan's HackTV branding. Needless to say, all of these attempts to preserve Doom for WebTV so far have been super shoddy and only seem to exist to supplement some custom scene-made firmware or scene-operated service. The only "proper" preservation of Doom for WebTV available right now is a copy of the Dishplayer version included in a collection of WebTV/MSN TV ROM images released onto Archive.org by us.

If you happen to have the original game files used by Doom for WebTV or any other WebTV games (we mainly refer to ones that run natively on the hardware, but web games also work), then reach out to us!

Obtaining and launching the game

On the original WebTV service, one would get Doom by connecting to TestDrive and either going to the "Games Setup" page and selecting Doom as a game to download, or by going to service URLs wtv-disk:/content/DownloadScreen.tmpl?diskmap=Doom or wtv-disk:/content/GameDownloadScreen.tmpl?diskmap=DOOM (which one is valid, we can't confirm right now). What goes on behind the scenes to download the game onto the unit is unknown at the moment. After the game is downloaded, the game could be launched in two ways. For the pre-December 1998 version of Doom for WebTV, one simple had to go to the local page file://disk/doom/docs/index.html?Done=Done and launch the game there. A direct method of launching the game was by using a client command, like client:boota?partition=DoomROM&size=5242880&source=file://disk/Doom/approm.o. This worked for versions of Doom for WebTV from December 1998 onward and before then.

Not too much is known about how Doom for WebTV compares to the original PC version of Doom. It is believed that the WebTV port is based off of the shareware version of Doom, but not enough documentation on the WebTV port is available to make that distinction yet. From what has been looked at, the port has the option to start a new game, or load and save a game. Starting a new game offers 4 episodes the player can choose from. In game, the player can choose from using their fist or a gun as a weapon. The player moves with the arrow keys, they can swap their weapon by using the 0-9 keys on the WebTV keyboard, open doors with the spacebar, and use their weapon with the Ctrl key. 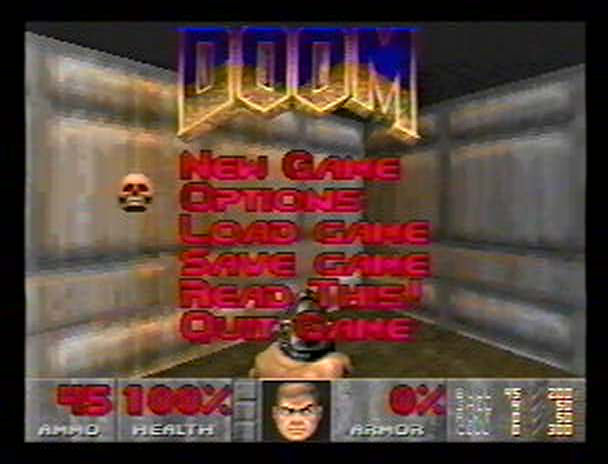