The MSN TV 2 was an internet appliance made by Microsoft that was designed as an upgrade to the first generation WebTV/MSN TV internet appliances. It introduced broadband, support for media playback, and an upgraded browser engine based on Microsoft's Internet Explorer 6 browser. The boxes were manufactured by RCA with the model number RM4100. They're also known to be decent Linux machines, and hacking the boxes to load Linux doesn't require a lot of effort. The first, and currently, the only method for doing this was discovered by Chris Wade in 2006, which involved a 4-pin serial port attached to the RM4100 motherboard and using it to flash a patched version of the MSN TV 2's BIOS by injecting shellcode directly into RAM. This patched BIOS would load a Linux kernel from the box's CompactFlash card on boot up in place of the stock MSN TV 2 firmware. Considering that the available guides for doing this are almost two decades old and are somewhat outdated nowadays, this guide will offer up-to-date and clear instructions for those interested in turning their MSN TV 2 box into a Linux machine. MSN TV 2 boxes nowadays are pretty rare to come by, though, and since the available kernels for them are built from very old versions of Linux, you might not be able to get much out of the MSN TV 2 running Linux these days.

This guide will assume that you're using the original toc2rta Linux kernel (the one without video out support). I (the wiki admin) won't go over installing the kernel with video out support as one, the only version of that available online requires compiling the Linux source code, which I have no experience with, and two, the compiled version is no longer available anywhere. This will also assume that you'll only use the stock CompactFlash card that comes with the MSN TV 2 to flash the patched BIOS and load Linux from. It's possible to add a hard drive for extra storage if you're able to solder an IDE port onto the motherboard, but that's out of the scope of this guide. One of the steps in this guide also requires that you have a Linux or macOS system available to you or a Linux environment compatible with Windows installed on your computer, since right now there's no working native equivalent for Windows computers. I'm hoping I can find a solution for that at some point in the future.

To perform this hack, you will need:

Before you can unscrew anything, you'll have to cut or remove the sticker with trademark information that's conveniently placed on the right side of the back of the MSN TV 2 box, which holds the two parts of its plastic shell together and prevents it from being fully removed. Since MSN TV has long since been defunct, tampering the sticker should no longer be a concern. You can slice this sticker by the crease it holds together, or go through the tedious process of completely removing it. Whatever method you choose, the two halves of the shell will be fully separated once the sticker is dealt with and now you can finally get to unscrewing the unit.

Do you see the four rubber feet on the bottom of the unit? Underneath those are four screws that you'll have to unscrew to remove the bottom half of the box's shell. Pry off each rubber foot and then unscrew each of the four screws with a Philips head screwdriver. Now gently remove the bottom half of the shell and you'll see a metal cage with even more screws that hold the motherboard and top half of the plastic shell together. Specifically, there are 5 screws holding the metal cage: two on the left, two on the right, and one somewhere in the middle. Unscrew all 5 screws with the Philips head screwdriver, and once you're done, remove the metal cage from the top half of the shell and flip it over.

Once you've fully disassembled the shell, remove the top of the metal cage. The serial port should be at the bottom left of the motherboard and have 4 pins. Below is a picture of it with the pinout. 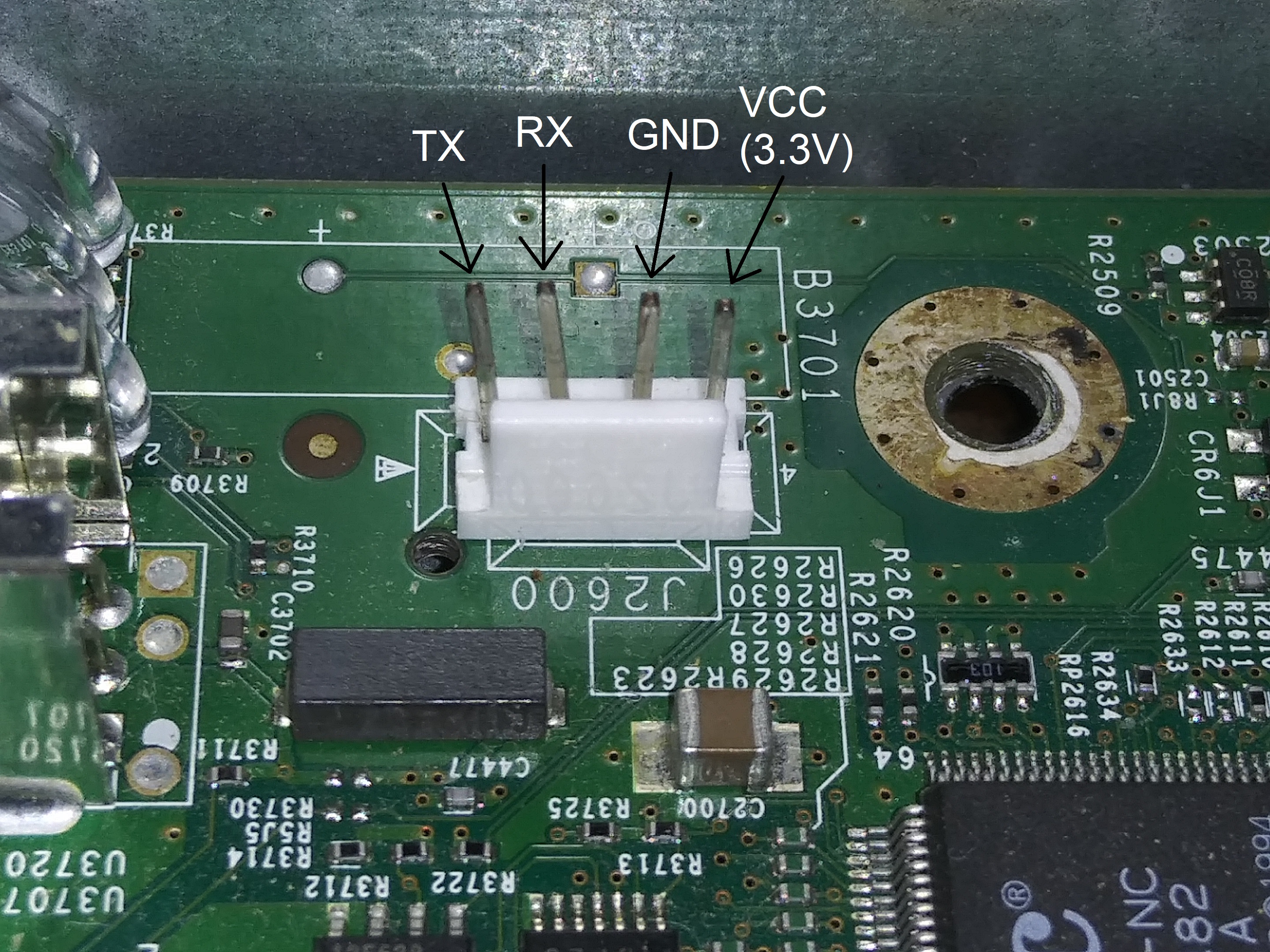 The pinout for the serial port is (from left to right):

The serial port on the MSN TV 2 operates at 3.3V. You can buy a USB to TTL adapter for cheap that supports this voltage. At least in this case, the 3.3V pin doesn't have to be connected. The TX and RX connections from the adapter you're using might also have to be reversed on the MSN TV 2's TX/RX pins.

Now take out the CompactFlash card from the MSN TV 2 and plug it into a computer. Before doing anything, I recommend you image the card in case you corrupt it and have to start over. Make sure you've downloaded kernel.zip, rootfs.tar.gz, and the patched BIOS before continuing. First, unzip all three files. In the unzipped kernel folder, copy the vmlinux.bin and cmdline files into the first partition of the card (this usually contains files for booting the MSN TV 2 firmware, such as BOOT.PRF and NK.BIN. Keep these in the partition for now). vmlinux.bin is the Linux kernel that the MSN TV 2 will boot Linux from, and cmdline is a text file containing the config for the kernel. If you're feeling adventurous, feel free to edit this file. Copy the patched BIOS from its folder, which has the filename "linux_patched_bios.bin", to the first partition with the filename "BIOS.BIN". If you're copying these files in Windows, make sure to remove the Archive attribute from vmlinux.bin and cmdline on the card as it's reported that Linux won't boot otherwise. You can do this by accessing the drive letter of the first partition in Command Prompt and running the following commands:

Next, you'll have to overwrite the entire third partition of the CF card (which contains at least three folders named "Init", "Print", and "Shell") with the rootfs.img file you extracted from rootfs.tar.gz. If you have a Linux or macOS system, or if you have a Linux environment installed on Windows, it's as simple as running dd if=rootfs.img of={CF_3RD_PART}, {CF_3RD_PART} representing the device name of the third CF card partition mounted on the computer (assuming no other removable devices are connected, this is usually "/dev/sda3"). Currently, there's no known way to do this natively in Windows.

Once everything's done, put the CompactFlash card back into the MSN TV 2.

Followed by a list of commands supported by the menu. If you don't respond to the # command in time, then simply plug out the power from the MSN TV 2 and plug it back in to try again.

Once you successfully trigger the service menu, now's where the good stuff begins. In order to flash the patched Linux-capable BIOS, the people over at Toc2rta devised a method to inject shellcode into the MSN TV 2's RAM that overrides one of the service menu functions and flashes the patched BIOS from the CF card when executed. The function in particular is the video test command (v).

First, type in "x" in the terminal to go to the "Examine memory" program in the service menu. Then, copy and paste each command in the following list one by one into your terminal to fully inject the shellcode:

(The following commands will only work on RCA RM4100 units. Thomson IP1000 units use a different set of commands that we won't include here for now)

Once all the commands have been entered into the terminal, type in "q" to exit the "Examine memory" program. Then, type in "v". Assuming everything's been done correctly, the MSN TV 2 should print the following text:

The MSN TV 2 will flicker the power and message lights back and forth while the shellcode flashes the patched BIOS. The terminal will then print "flashing successful, you can now reboot" when it's done. To reboot without touching the MSN TV 2 again, just press Enter to exit the video test, and then type in "q" to reboot the box. On reboot, the Linux kernel should boot and print to the serial terminal.

Congrats! You've successfully hacked your MSN TV 2 box to run Linux. Go crazy with it. I have no idea how useful they'd be nowadays, but now you can load whatever programs you want onto the CompactFlash card or run a server on it. Whatever you want to do to make it your own. It would definitely be cooler if a compiled video patch were still available or better yet, if a GUI distro or modern Linux kernel can be compiled to run on the MSN TV 2. This stuff hasn't gotten any attention in the past decade, so there's a lot of room for improvement. Feel free to join the WebTV/MSN TV Discord or the #WebTV IRC channel on Libera.chat to further discuss about this topic.