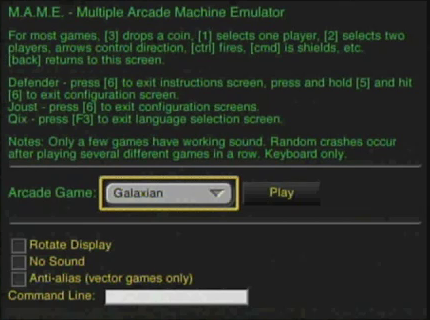 MAME on WebTV Plus showing the selection screen

The MAME emulator received a port on the WebTV Plus, which is believed to have been officially available some time in at least 1998 on the TestDrive WebTV service, albeit remaining unreleased to the public for the duration of WebTV/MSN TV's life. It was only publicly released in 2014 when WebTV/MSN TV hacker MattMan69 included it with his custom build, when it was discovered on another WebTV scene member's box. This port was likely developed without involvement of the MAME developers.

The WebTV Plus port of MAME boots up to a selection screen, offering a predefined list of games to emulate. It also has options to rotate the display, toggle sound and anti-aliasing for vector-based games, and an option for a "command line" that remains undocumented as of writing. The selection screen notes that the emulator has issues with sound in most games it emulates and can crash randomly, making it obvious that it was never finalized. Emulation of sound in general also appears to be off, being higher pitched than normal. As of 2014, there is video of this port running and emulating games on an actual WebTV Plus.

Controls are restricted to the WebTV/MSN TV keyboard. Taken from the WebTV Plus MAME selection screen.

1 - Start game with one player

Back key - Returns to selection screen

Holding the 5 key and then pressing 6 exits the configuration screen.