WebTV for Dreamcast, officially known as Microsoft WebTV Connection Kit (マイクロソフト ウェブ・ティービー接続キット), is a port of the first-generation WebTV client software released for the Sega Dreamcast video game console exclusively in Japan. If you have no idea what WebTV is and what it was designed for, it's essentially a service that offered internet to customers with dedicated solutions (usually a set-top box) that'd utilize the TV set, a common household item, as a display. You can read a bit more on the overall product and service itself by reading the Wikipedia page on WebTV, and since our wiki is centered around WebTV, feel free to check out our other pages on specific topics related to it. It is unknown when copies of WebTV for Dreamcast started being produced, but the complementing service debuted in Spring of 1999, using a subscription model (similar to the WebTV/MSN TV service in the U.S.), and the software was offered free of charge by either mailing a postcard included with Japanese Dreamcast units, or if that wasn't an option, requesting a copy from WebTV directly through e-mail [1] (Japanese). It is one out of many Dreamcast titles utilizing Windows CE technology. The underlying browser used by WebTV for Dreamcast is assumed to be based on Internet Explorer 2.0.

It is believed that during initial release, WebTV for Dreamcast was an improvement over the Dream Passport browser bundled with Dreamcast units in Japan, but by the time Dream Passport 3 released Sega had caught up and their browser was much more capable than WebTV's.

There are two known major releases of WebTV for Dreamcast: the launch release (v1.004), and a later release titled Microsoft WebTV Connection Kit: 128bit SSL Compatible Version (マイクロソフト ウェブ・ティービー接続キット 128bit SSL対応版), which as the title implies, added 128-bit SSL support (v1.011). To our knowledge there are no major differences between either release aside from the latter adding support for sites utilizing 128-bit SSL. Both were obtainable through mailing a postcard or e-mailing a specific address that handled requests for the Dreamcast software, but by the time the 128-bit SSL upgrade was made available in December of 1999, the launch version was obsoleted and the upgrade was shipped free of charge to those who were already subscribed to the Japanese WebTV service through submitting a request for the Dreamcast software prior.

In total, there are 4 known prints of WebTV for Dreamcast, SSL compatible or otherwise. There are 3 prints with known "catalog codes", which will be listed below along with what major release they belong to:

The two 128-bit SSL prints with known catalog codes have cases with different thicknesses, with the 610-7391 print having a thicker case (like the known catalogued launch version) than 610-7390, which has a case with the thickness of a standard CD jewel case. The 610-7390 print also lacks a full instruction manual, only having the front and back for the cover printed, which might hint as this print being made to be sent to those already subscribed to the WebTV service in Japan before the 128-bit SSL upgrade was released. Aside from all 4 prints using slightly different user agents for the browser, we do not know any other differences between the software.

These days it's hard to get a copy of either version of WebTV for Dreamcast for a decent price, especially the 128-bit SSL version, not to mention that not many of them appear often. Thankfully, at least two prints have recently been dumped in their full .GDI format, covering both the launch and SSL-compatible releases, and are currently available on the Internet if you know where to look for them.

When booted up without a registered account, WebTV for Dreamcast presents a main menu with options to connect to WebTV, browse a demo of the Japanese WebTV service, go to a help section titled "What's WebTV?," and view the controls for the controller. With an account registered on the Dreamcast, the demo and help options are removed from the main menu and an additional connection option is added, its purpose currently unclear right now.

The core WebTV component of this software is barely any different from what you'd get on dedicated WebTV/MSN TV hardware (first-gen). The Dreamcast version communicated with the service in a similar manner to the dedicated solutions and even used the same WTVP protocol dedicated hardware would use to request service content. While there is very little info on the underlying service used by WebTV for Dreamcast as it stands, we assume it wasn't any different to its American counterpart outside of being in a completely different language, and offered a similar set of services (e-mail, discussion groups, chat, and search, to at least name a few).

WebTV for Dreamcast is technically another version of the WebTV Viewer, but designed for the Dreamcast. In the high density area of the disc, a "WEBTV.ROM" file is stored. This is a ROMFS file with no compression or encryption applied to it, that when extracted, contains data used by the main game executable to provide the entire UX for WebTV for Dreamcast. Speaking of which, that is essentially a bunch of interactive, interlinked HTML files displayed to the end user, similar to how the UX was designed for dedicated hardware. Even the start screen shown when WebTV for Dreamcast boots up is simply a JPEG displayed in an HTML file!

The "WEBTV.ROM" file on the WebTV for Dreamcast disc also contains various bits of unused data and data left over from other WebTV builds. Unused data that has been observed so far includes image files "Sega_Splash_Text.gif" and "Sega_Splash_Ani.gif", which don't appear to be used throughout the final product. In the currently existing rip of the 128-bit SSL version, there's also an entire folder left unused in the ROM file, which is stored as folder "FijiOB". This folder contains HTML pages intended for testing purposes and a few image files, most notably, a rudimentary "WebTV Dreamcast" logo. In terms of leftover data, there are various appearances of data in the form of several images, HTML files, and ROM string files that look like they were carried over from a WebTV Plus/Echostar build.

The ROM string files used by WebTV for Dreamcast appear to store all text in Shift-JIS encoding. Most HTML files stored in the WEBTV.ROM ROMFS container also use Shift-JIS encoding for text. Some HTML pages that are directly stored on the high density area of the disc, however (i.e., controller pages), use ISO-2022-JP for text encoding, with others using Shift-JIS.

As stated earlier, there isn't any real difference between how WebTV for Dreamcast and the dedicated WebTV/MSN TV hardware communicated with the service and for the most part are identical in that aspect. WebTV for Dreamcast has been recorded to use the IP 10.0.1.129 on port 1615 to contact the pre-registration (first-time use) service, however, as opposed to the standard 10.0.0.1 IP seen on American WebTV/MSN TV units. Also, protocol requests sent by WebTV for Dreamcast have been seen using different values for certain headers, or new headers entirely. Said headers usually identify the type of client connecting to the service.

There are four known user agents believed to be used by the 4 known prints of WebTV for Dreamcast:

The presence of "MSIE 2.0" in all of these user agents possibly led to the belief that the browser was based on Internet Explorer 2.0.

START - Starts the disc on boot up. Goes back to the main menu when not logged in. Goes to the WebTV home page when connected to the service

The following images for the scans were taken from Sega Retro's article on WebTV for Dreamcast. 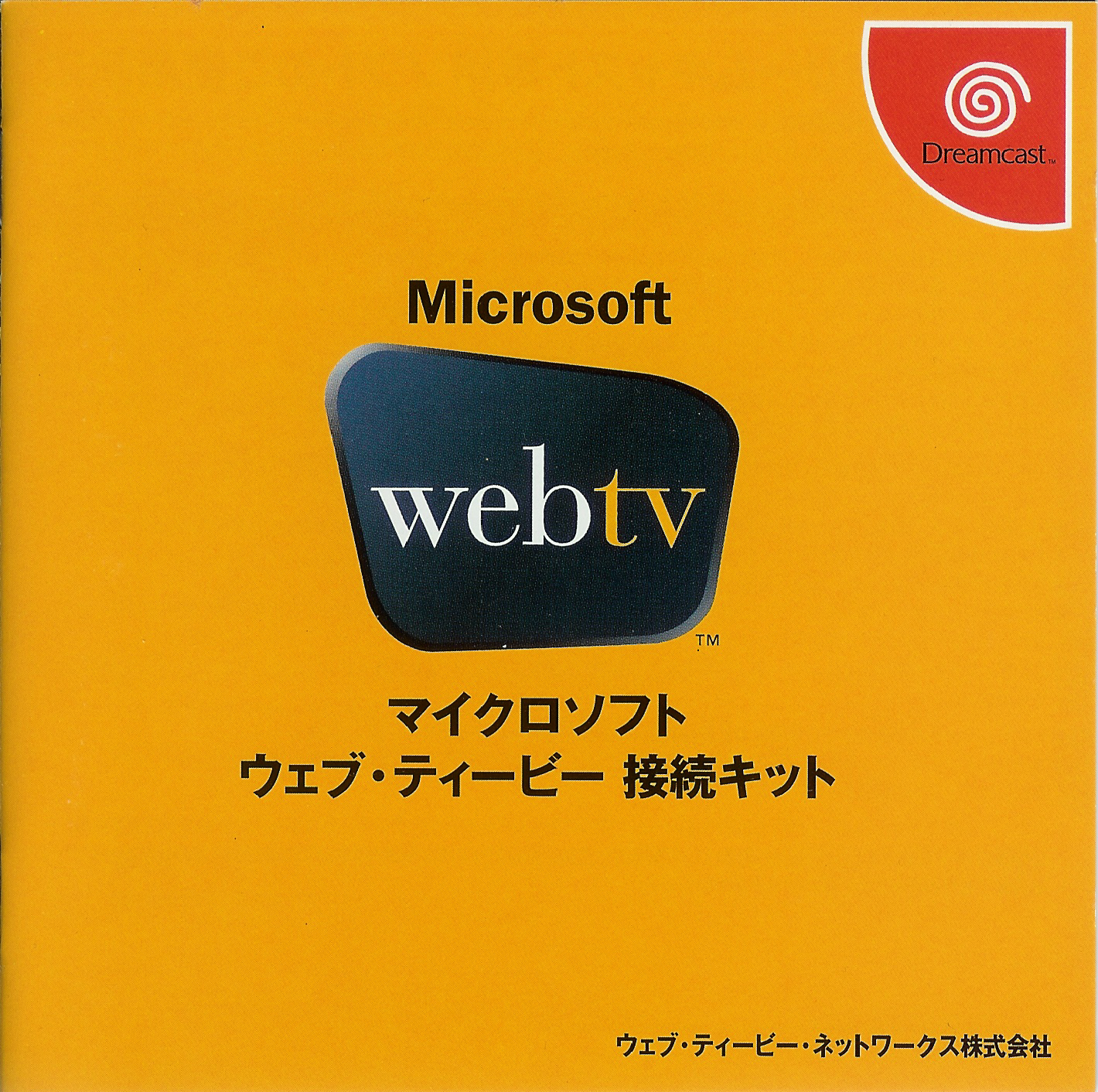 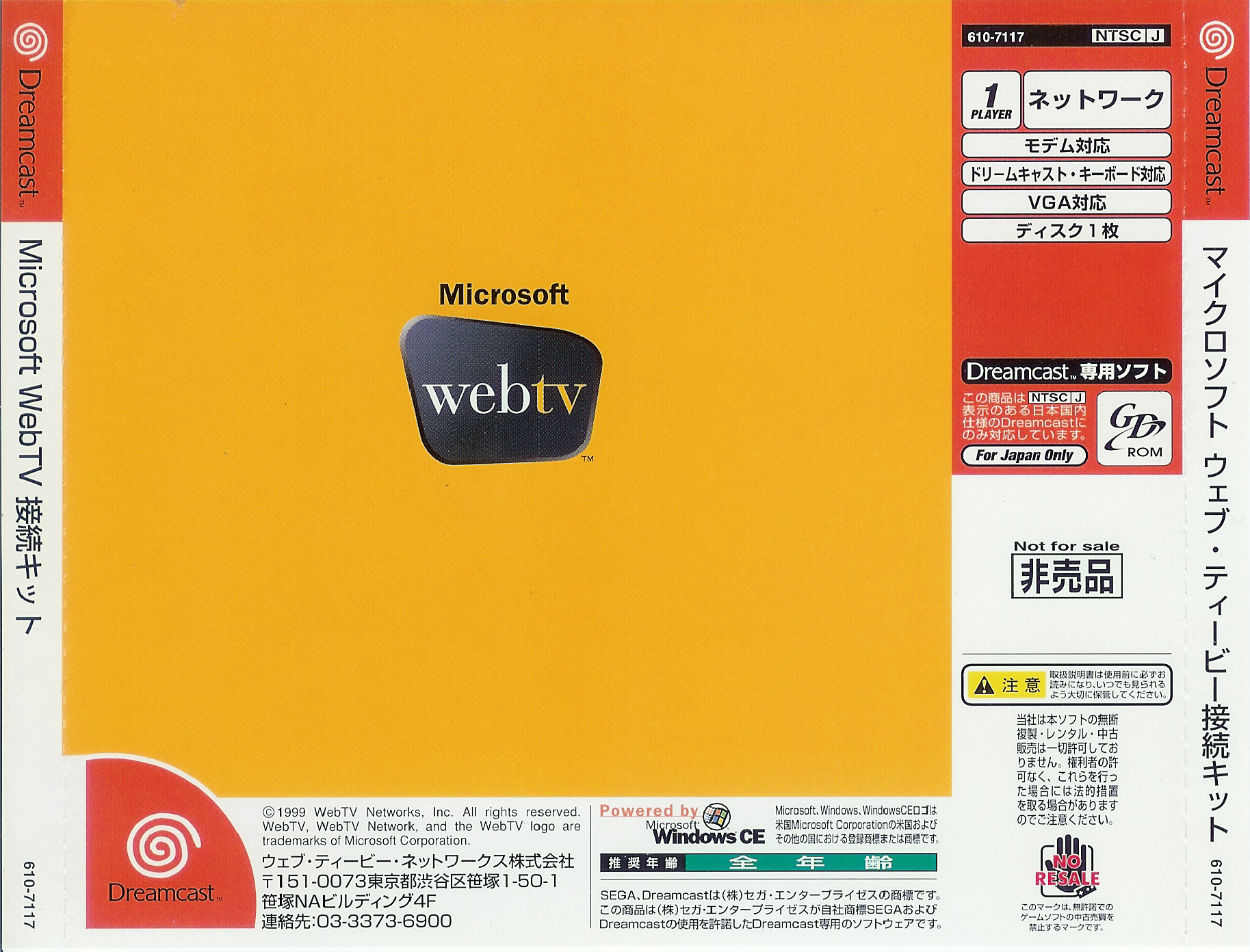 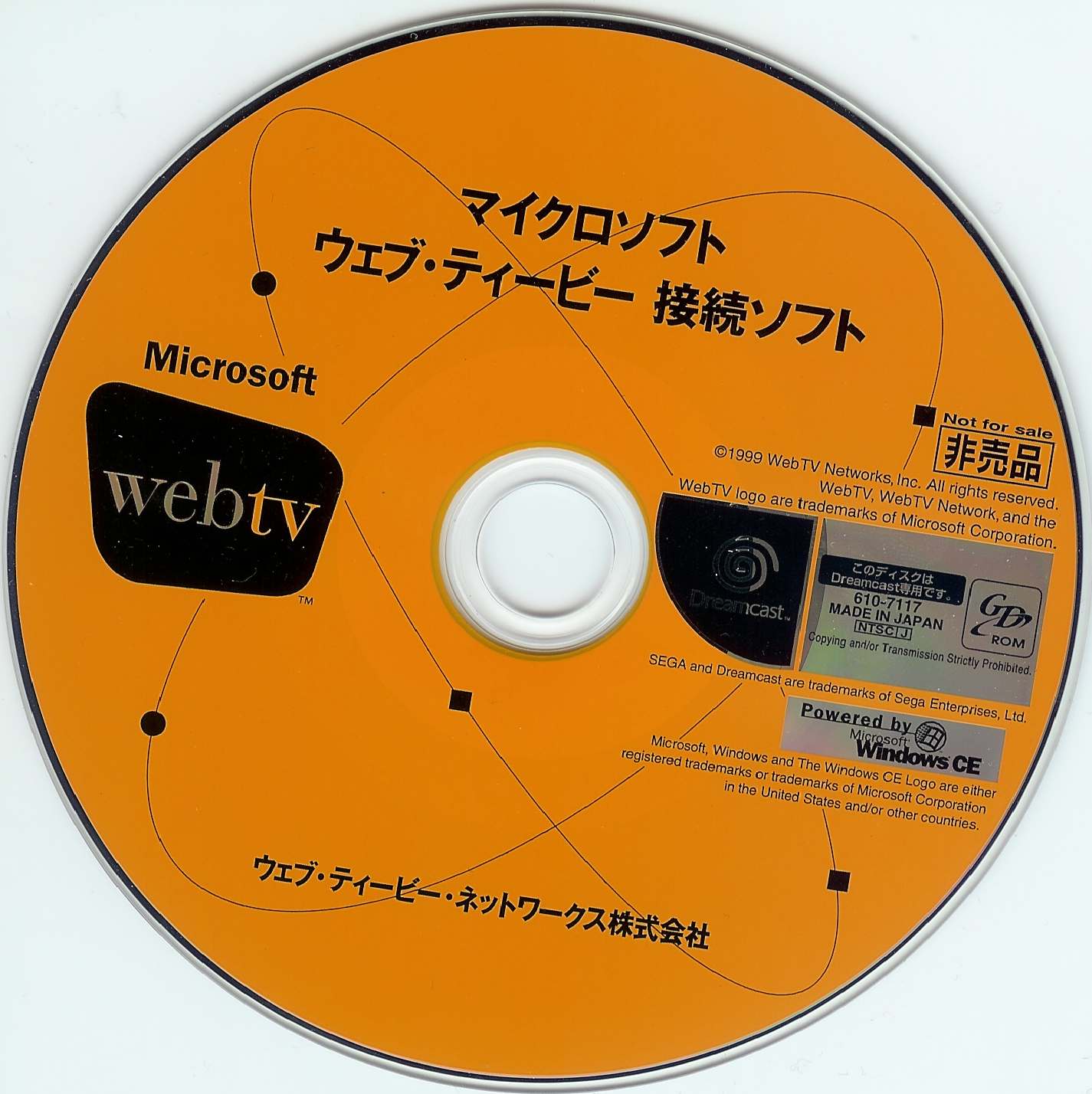 With the 128-bit SSL version of WebTV for Dreamcast, the only difference with the media aside from the spine is that the disc itself is entirely silver as opposed to the yellow label the launch disc came with. 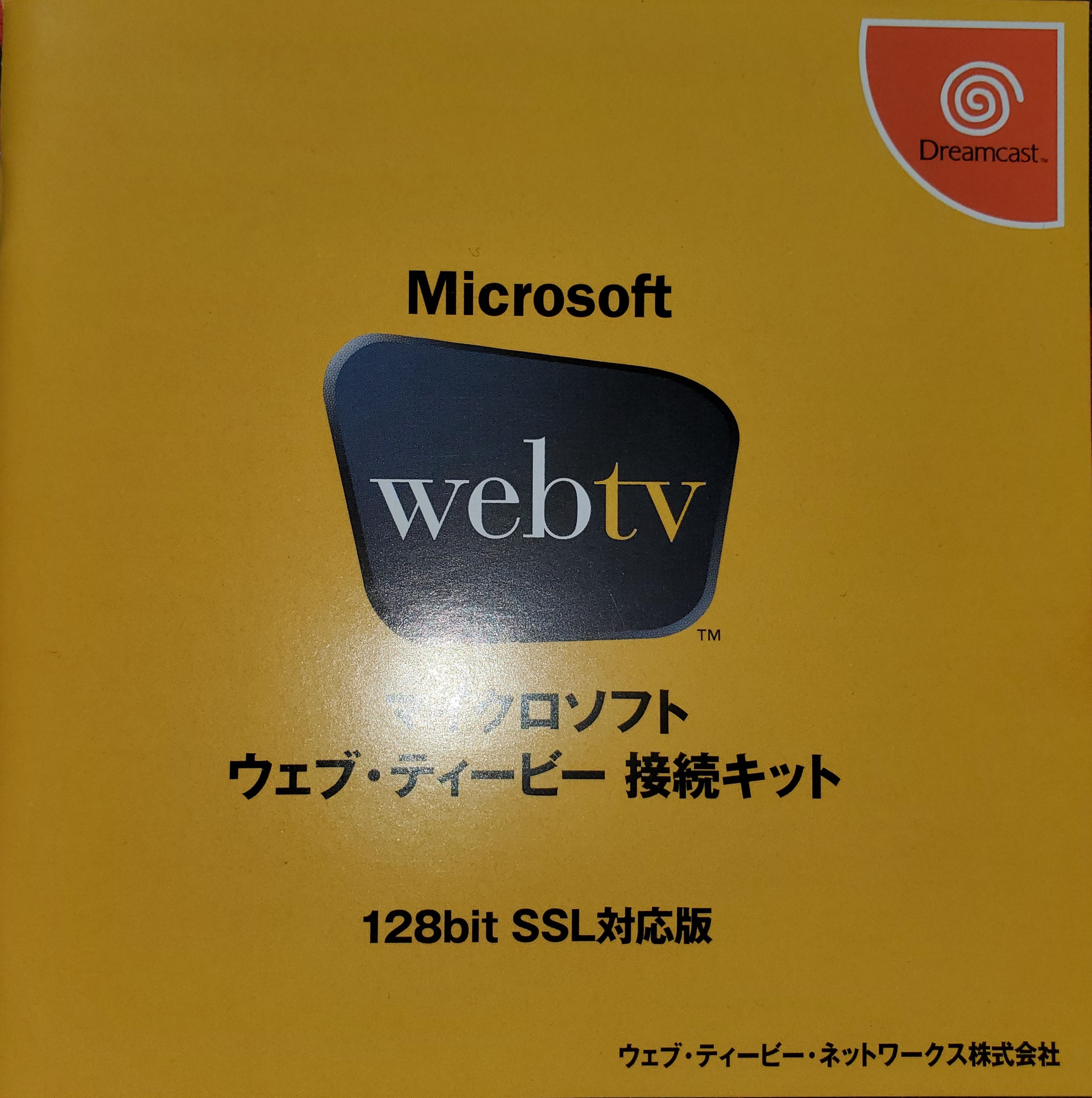 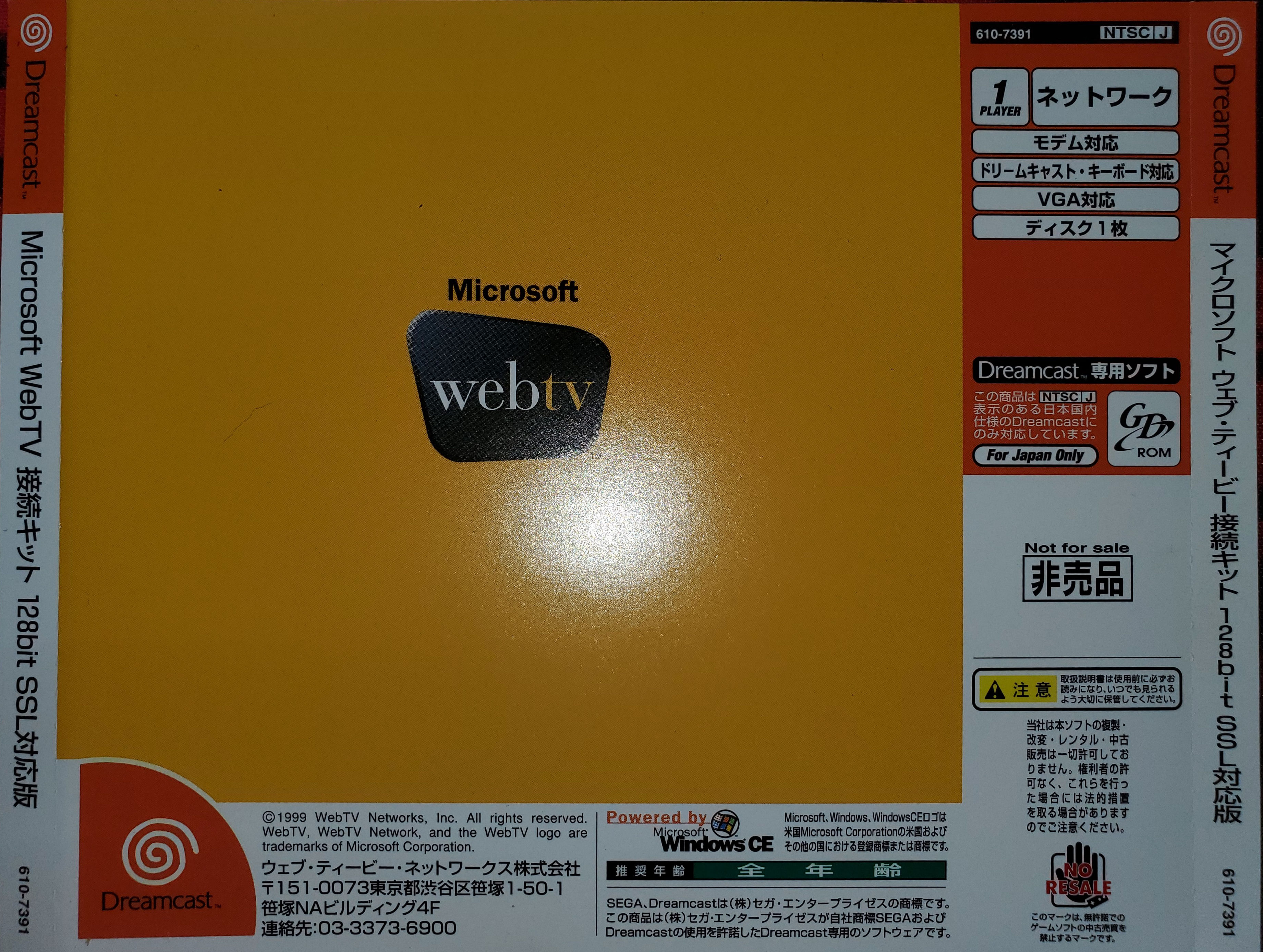 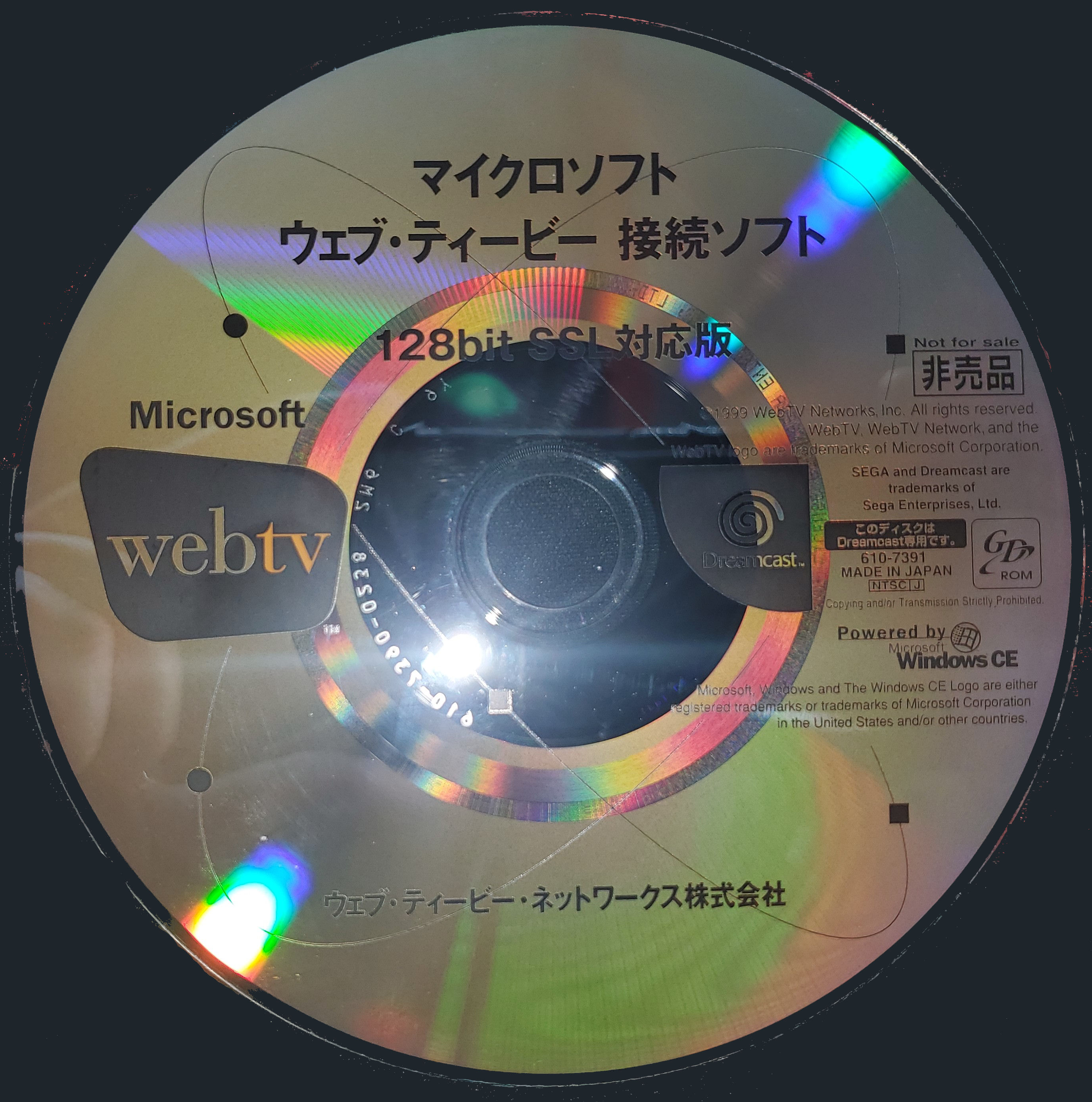 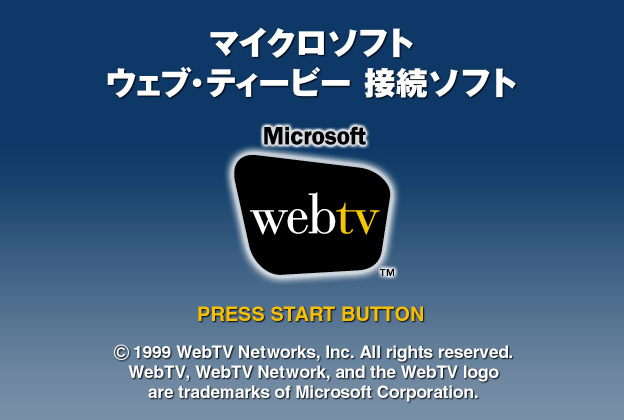 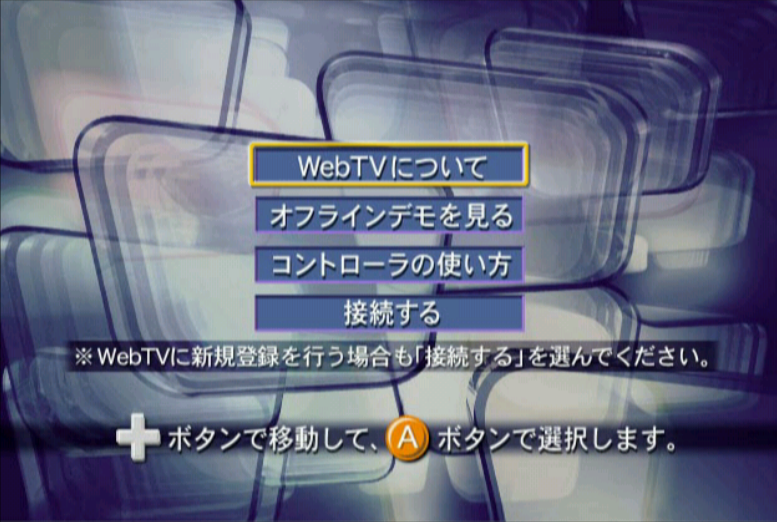 Main menu (when console isn't registered on the WebTV network) 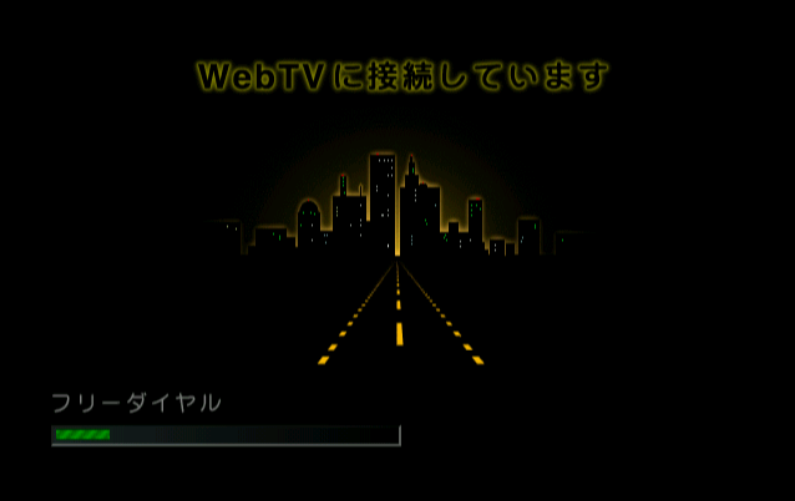 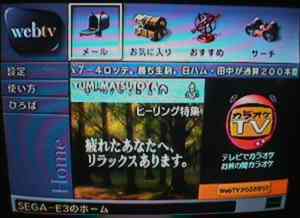 Picture of the Japanese WebTV service in Fall 1998, as shown on the Dreamcast (image from Sega Retro's WebTV for Dreamcast article) 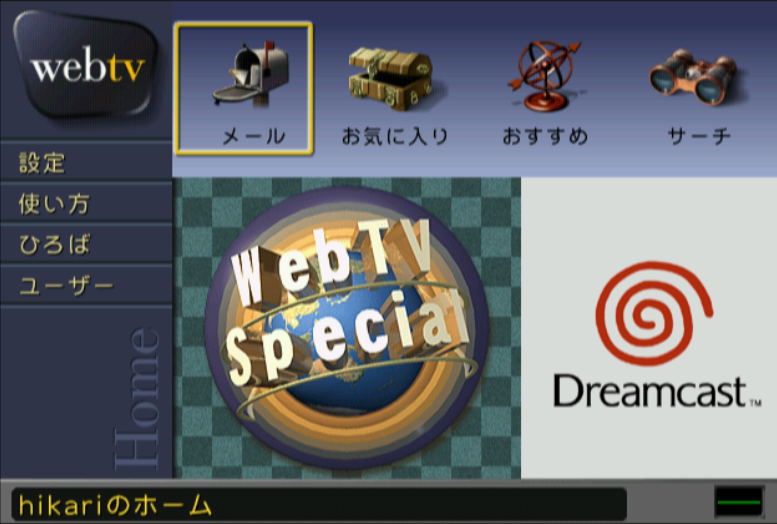 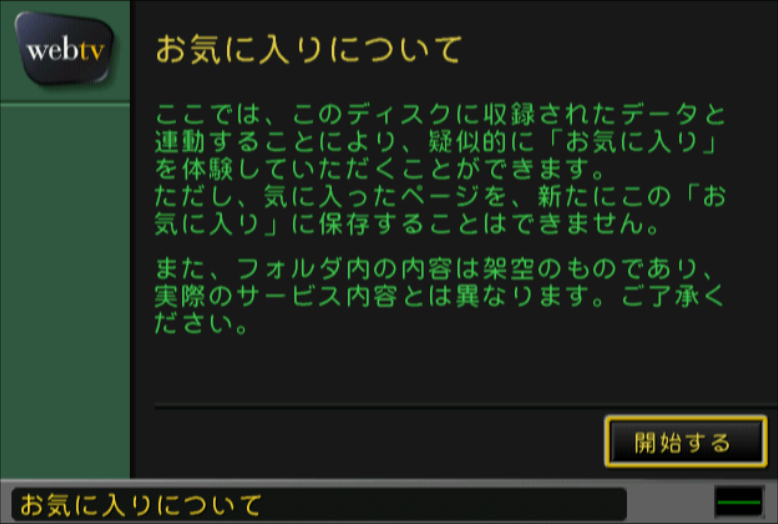 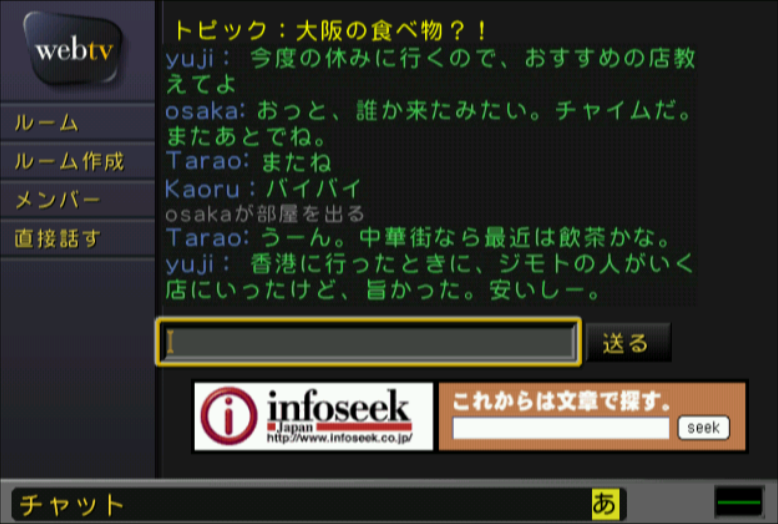 "Sega_Splash_Text.gif" - Image is a string of text that when translated reads "Downloading data." Its possible use cannot be determined at the moment

"sonic-40.gif" - An image of Sonic the Hedgehog. Not much else to say. Only used in the FijiOB "home.html" file.

"tv-60.gif" - An image mockup of a WebTV Plus being used on a TV set. Also used exclusively in the FijiOB "home.html" file.